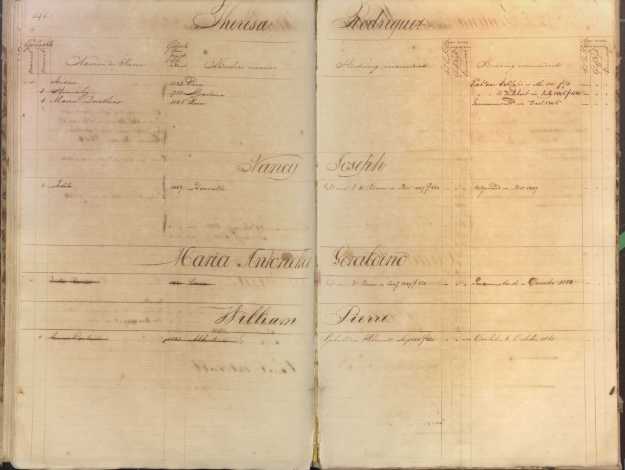 On August 17, 1795 a slave revolt started on the Dutch Caribbean island Curaçao, some seventy kilometers north of Venezuela. Exactly 225 years after Tula’s Revolt the Nationaal Archief of Curaçao presented the searchable online version of the Slavenregister, eight slavery registers from the nineteenth century. Two years ago I wrote here about the launch of the digitized slavery registers from Suriname, a former Dutch colony in Latin America. The two projects invite a comparison. I will look also at other online resources for the history of the Dutch Antilles, six Caribbean islands with a history of Dutch colonial rule.

The announcement at the website of the Nationaal Archief, located in Willemstad, the main town of Curaçao, gives you some background to the project done in cooperation with scholars of the Radboud University Nijmegen, led by Coen van Galen, and the University of Curaçao. The late Els Langenfeld laid the foundation for the project with her transcriptions. Apart from eight slavery registers also two emancipation registers have been digitized and indexed. The Dutch Nationaal Archief, The Hague, helped with creating the database for the data and the digital images. In its announcement about the launch the Dutch national archives give more information. The slavery registers cover the period 1839 to 1863. The emancipation registers stem from 1863. You can find at the website in The Hague a video in Papiamentu about the project, and there is a message from the Dutch minister for Education, Culture and Sciences. The registers at Willemstad can also be searched at the website of the Dutch Nationaal Archief. By the way, recently the Dutch national archive integrated its search portal Ga het NA into its main website. The Dutch archive also provides a guide to these records. There is a version in rudimentary English of the search interface without a version in English of the guide; the Dutch version is not mentioned.

The search interface in Curaçao allows you to filter directly for a particular register. In the advanced search mode you can search six fields separately. Unfortunately I did not succeed in using the advanced search mode in three different browsers. Search results can be sorted by clicking on the respective headings of the columns, a quality that could perhaps be more visible with arrows. There is also a guide to assist your search questions. Its Dutch counterpart has only filters for the type of register, and there is only a simple free text search field and a choice for sorting the results for all fields except one field of the registers, by name, gender, the mother’s name, entry date and exit day (uitschrijfdatum), either the day of the emancipation or another date noted in an entry. 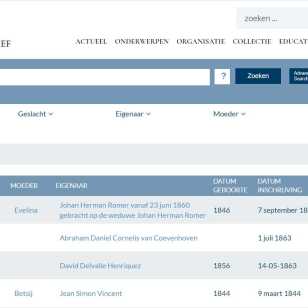 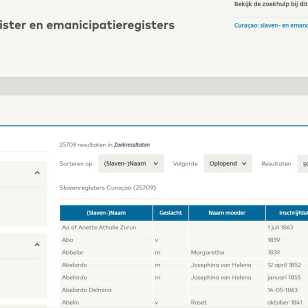 The search interface in The Hague does not show the name of the eigenaar, the owner of enslaved people, nor do you see them in the list with search results. Only when you click on an individual search result the name of the (former) owner becomes visible. Luckily the owners does show up in the uitleg (explanation) – in Dutch again – about the fields. You can download in The Hague a zipped file with the index to the registers as an XML file. The efforts for assistance and explanation are important, but at the moment of writing it seems some efforts are needed to get things working properly. It is good to note here the fields with subsidiary information about the owner. However, here, too, the presentation of search results in Curaçao is different, with two blocks of fields against a single column with the fields at The Hague.

Both the absence of the owner field in The Hague and the disfunction of the advanced search mode in Curaçao are substantial problems. Again as with the project for the slavery registers from Suriname only the Dutch version is complete. The very presence of a video in Papiamentu underlines the need for search interfaces, guides and explanation is this language and in English. In view of the Caribbean region a Spanish version would be most sensible, too. The archive in Willemstad calls itself on its website a Porta pa Historia, but that door needs to be open not just in Dutch. The Dutch national archives provide a searchable index of manumissions of enslaved people on Curaçao between 1722 and 1863. Even the heading Vrij van slavernij (manumissies) has not been translated in the English version of this index.

The Dutch and the Caribbean

If digitizing a resource is important for historical understanding and if you know the general public will appreciate your efforts, it is only normal to do a proper job. The two versions of this new resource can cause some frowns, but I will certainly not deny the importance of being able to use the database for the Curaçao slavery and emancipation registers. Let’s look briefly what other resources can be readily found online nowadays.

In the Digital Library of the Caribbean Curaçao figures with only a few items. For the neighbouring island Aruba you can find some fifty items. Bonaire, a third island within the Dutch Antilles, is absent. In 2019 the Nationaal Archief of Curaçao, the Maduro Foundation and the National Archaeological and Anthropological Museum launched the history portal Curaçao | HISTORY with virtual exhibits on several subjects, You can use a timeline to choose a theme, for example Tula’s revolt. Surprisingly the abolition of slavery in 1863 is present only with a printed proclamation in Papiamentu. At the Dutch Caribbean Digital Platform are digital collections of institutions at Curaçao, the Dutch Royal Library and Leiden University. The Archivo Nacional Aruba has some digital collections, in particular audiovisual materials. 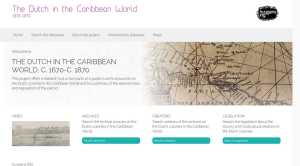 The Huygens Institute / Institute for Dutch History launched some years ago the portal The Dutch in the Caribbean World, c. 1670- c. 1870 with a guide to archival sources, legislation and ordinances. In fact the West Indisch Plakaatboek edited by J.Th. de Smidt, J.A. Schiltkamp and T. van der Lee  (5 vol. in 3 parts, Amsterdam 1973-1979) is its very core. At the Delpher platform you can find digitized official gazettes for the Netherlands, the Antilles, Indonesia and Suriname. Leiden University has created a separate entrance for Caribbean Books, some 950 in total, but only 200 are available in open access. Within its Digital Special Collections you can find a number of collections owned by the KITLV / Royal Dutch Institute of Southeast Asian and Caribbean Studies. Four Dutch ethnological museums, among them the Tropenmuseum in Amsterdam, have created a shared collections portal (interface Dutch and English). Recently the Tropenmuseum showed the exhibit Afterlives of Slavery. The old website of the Foundation for Dutch ethnological collections does still function. The Tropenmuseum has a digital collection on slavery with some 1,700 items at the heritage portal The Memory of the Netherlands.

In January I visited De grote Suriname tentoonstelling, a truly major exhibit on the history of Suriname at the Nieuwe Kerk in Amsterdam, the church next to the royal palace on the Dam Square. This exhibit succeeded in showing an overview of Suriname’s history with the widest possible variety of subjects and themes, thus enabling you to get a more integrated view of this country and its history. Let’s hope the digitized slavery and emancipation registers for Curaçao, too, will help to foster a better understanding of a crucial period in the history of this island. The aftermath of slavery continues up to today. Its story needs to be told not just in Dutch.

Some remarks here about the quality of the search interfaces for this project might seem harsh, but a few things make them at least understandable. Knowing about the (former) owners of enslaved people is perhaps the most asked question when using these registers. Depending on the name of the owner freed slaves often received their name. The general public wants to know also about the background of the owners. Many of them lived in the major towns of the Netherlands. Their wealth was to a considerable extent built on the fruits of slave labor. Finally I think both archives should realize they could create the database thanks to the research and efforts of the late Els Langenfeld. It is not just a question of presenting material in your own holdings online, but also acknowledging the fact this has become possible thanks to a person whose memory should be honored by using her transcriptions and index to the fullest possible extent. Perhaps it is only a question of changing the layout to make the owners more visible from the start. The current layout should not be a stumbling block to having the data in full view.