The close relations between law and art are a phenomenon which increasingly receives scholarly attention. In fact legal historians and other legal scholars in other disciplines have created a special field for studying the symbiotic appearance of law, legal iconography. Until February 5, 2017 the Groeningemuseum in Bruges presents the exhibition The Art of Law. Three Centuries of Justice Depicted. On january 16 to 18, 2017 a conference will take place at Bruges around this exhibit, with a slightly longer title, The Art of Law: Artistic Representations and Iconography of Law & Justice in Context from the Middle Ages to the First World War. Legal iconography is a subject I discuss here regularly, Among other reasons to promote this discipline is the chance to combine texts and images. On my website for legal history I have devoted a section to digital collections for legal iconography.

The imagery of justice and injustice 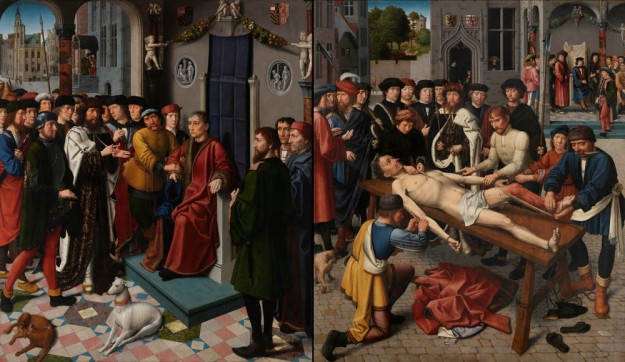 At the heart of the museum and the exhibit is one of the most iconic paintings showing justice at work. If you try to look at it calm you will in the end shiver in front of the gruesome image at the right side of this double painting. Gerard David was commissioned by the city of Bruges to make this painting with The Judgement of Cambyses in 1498. Once it hung in the city hall, but since the nineteenth century it is among the highlights of the Groeningemuseum. The painter shows on his diptych at the left the Persian king Cambyses ordering the arrest of judge Sisamnes who was suspected to have accepted bribes. The story comes from Herodotus’ HIstories. The graphic depiction of the punishment delivered to this corrupt judge was meant as a warning to judges not to accept money for their judgment or to steer away from justice.

The power of this painting for the people of Bruges was apart from the powerful composition the use of contemporary settings for both scenes, with familiar buildings in the background and people wearing the clothes of their own time. The choice for a subject from Persian history taken from a Greek historian should make you think about the accessibility of Greek texts in fifteenth-century Europe either in the original or in complete or partial translations and adaptations. The painting of David played a role in Johan Huizinga’s view of late medieval society in his famous The Waning of the Middle Ages (1919), even though early editions were published without illustrations. Its first chapter had the title ‘s Levens felheid, “The fierceness of life”. Huizinga had seen an exhibition of early Dutch and Flemish paintings. The term “Flemish Primitives” might sound curious but is still sometimes used for the painters at the beginning of the great era of painting in the Low Countries. As for Huizinga’s view of the drastic character of late medieval justice, a recent article by Maarten Müller, ‘Het felle leven en het kalme gerecht : misdaad en straf in vijftiende-eeuws Haarlem’, Pro Memorie. Bijdragen tot de rechtsgeschiedenis 15 (2013) 5-31 – also availabe online – corrects his views to a large degree. Huizinga had edited sources concerning the legal history of Haarlem [Rechtsbronnen der stad Haarlem (The Hague 1911)]. It is rather strange that he did not hesitate to create a more colourful view of late medieval realities. By the way, in 2015 Pro Memorie devoted an issue to legal iconography. 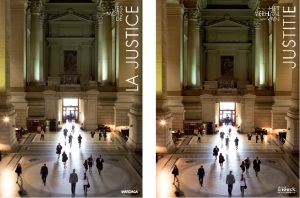 The conference from January 16 to 18 does not look only at medieval legal iconography. Only one day will be devoted to the Middle Ages. The second day centers around legal iconography in the Early Modern period, and on the third day scholars will look at the long nineteenth century. Many scholars from Belgium will speak at this conference, but otherwise scholars come to Bruges from all over the world. The range of subjects is impressive, and I have to stop myself from picking out my personal favorites and surprising themes! At the end of the conference the project IAP Justice and Populations will launch the new volume of studies Les mots de la Justice/Het verhaal van Justitie. The front cover shows the entrance hall of the Palais de Justice in Brussels, probably the most labyrinthine building ever built, showing both the power of law and justice in its huge dimensions, and alas almost as powerful also its intimidating power because of its impersonal dimensions. The header of the website of this Belgian project shows a nineteenth-century photograph of this immense building, looking very much as a kind of spaceship that has just landed on earth. The organizers of the conference succeed in overcoming the linguistic frontiers that often divide modern Belgium. Their happy cooperation should set an example for the future.

As for the lovely city of Bruges, you can balance the present look of the old city, for some tastes perhaps too idealized, with a look at home at the wonderful new portal Erfgoed Brugge [Heritage Bruges], only accessible in Dutch, with sixteen digital collections and catalogues  bringing you to documents in the archives, archeological findings, paintings and objects such as sculptures, tapestries and jewellery in the museums, the poetry and letters of Guido Gezelle, manuscripts, maps, newspapers, engravings, drawings and much more. Legal historians should note the recent addition of nearly one thousand printed poster-sized proclamations and ordinances from the First World War. You will have to register online with the Archiefbank Brugge to gain access to these aanplakbrieven, definitely a Flemish word. For those visiting Brugge the Groeningemuseum organizes also guided tours to the main locations of law and justice in medieval and modern Bruges.