After all attention given to texts from and concerning the French Revolution it is now time to turn to resources for digitized images from the eighteenth century. Texts about tolerance and its counterpart intolerance create – deliberately or inadvertently – images of targets, and also of cherished values and attitudes. Take Voltaire: he was a playwright, and apart from his obvious rhetoric talents we should acknowledge his ability to present matters in a dramatic way, to stage stories and bring them vividly before the eyes of the mind and into the hearts of his public. How to find French caricatures from his time, and what did Voltaire think himself about them? This post continues the series starting with Laws and the French Revolution and followed by Some notes on the history of tolerance.

Among French pictorial resources one of the best starting points is the image database of the BnF. You will encounter a rich choice of French historical images at the portal L’histoire par l’image, 1789-1939. Images from the nineteenth century with also five years of the century before it can be traced in the records of the French legal deposit at Images of France, 1795-1880, yet another ARTFL resource. The Joconde database enables you to search for images in the collections of French museums. Another major resource is the Bibliothèque numérique de l’Institut National d’Histoire de l’Art where you can also search for books, manuscripts and archival records. The Moteur des collections at Culture is a very useful meta-catalogue to French collections, even when filtering your search results is sometimes difficult. We encountered already the images section of the French Revolution Digital Archives, a vast collection that luckily is not strictly limited to images created since 1789. Some two hundred images can be found at Liberty, Equality, Fraternity: Exploring the French Revolution, a virtual exhibition of the Georg Mason University and City of New York University. 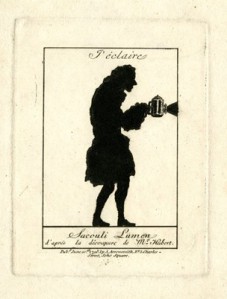 Images of Voltaire himself are also part and parcel of virtual exhibitions such as those of the Bibliothèque nationale de France (BnF) in Paris about Candide (1759) and a similar one of the New York Public Library. The BnF has also a dossier about Voltaire and the collections about him at Paris at Saint Petersburg, with a useful list of works by Voltaire digitized at Gallica. At Trier, too, a virtual exhibition about Candide has been created. Yet two kinds of images are really hard to find online, caricatures showing Voltaire, and images of him using an almost archetypical technique of the late eighteenth century, the silhouette. One of the greatest masters of this art is directly related to Voltaire’s life, the Swiss artist Jean ‘Voltaire’ Huber (1721-1786). I have to confess that I had hoped to retrace a complete series of his silhouettes of Voltaire, but this is very hard to find. Tantalizing the image database of the BnF has two cartons from which Huber made a number of his silhouettes with Voltaire. Both the Château de Voltaire at Ferney-Voltaire and the Musée historique de Lausanne are currently closed for renovation. The collections web site of the museums in Lausanne brings me some paintings by Jean Huber, including the intimate portrait showing Voltaire in the early morning, the Lever de monsieur Voltaire. In the database of the Swiss Institute for Art Research I did find some silhouettes by Huber, but alas not his famous images of Voltaire. A more systematic search using the links collection of the Voltaire Foundation in Oxford brought me to the iconography section of the online bibliography of the Société des Études Voltairiennes in Lyon, but here, too, I searched in vain. The blog of the Voltaire Foundation is most interesting , but one has not added yet a search function. However, this institution provides us also with a good dossier on Huber’s painting La Sainte Cène du Patriarche (around 1772) for which sketches exist.

It is only natural that Voltaire as a master of satire became himself the object of caricatures. On my legal history website I have included among the virtual exhibitions a number of image collections containing eighteenth-century caricatures, but it lacks a specific resource for the French Revolution. With some luck I found a wonderful online resource at Waddesdon Manor, Aylesbury, Buckinghamshire. The collections of this stately house were brought together by members of the Rotschild family. You can search directly in the Saint-Aubin collection with drawings by Charles-Germain de Saint-Aubin (1721-1786). Two of his comic drawings in the unique album with some 400 items called Livre de caricatures tant bonnes que mauvaises show Voltaire. In 2012 the digitization of this album was completed. It is surely surprising to find this rare resource among the more august objects of the collections at this location. In my view this album is a splendid source which enriches and changes considerably our views of visions on eighteenth-century France.

There is a great gateway to online collections of cartoons and caricatures at EIRIS, the Équipe Interdisciplinaire de Recherche sur l’Image Satirique. The very useful links section will bring you for example to a great list at arthistoricum of French creators of satirical drawings. The major drawback for me it is its focus on the nineteenth and twentieth centuries. The image section of the French Revolution Digital Archive contains ten satirical scenes among the nearly eighty pictures with Voltaire. You will find more than one thousand satirical scenes among the 13,000 images, and some 35 items mentioning or showing silhouettes. The search functions in the FRDA are indeed superior to those at the images website of the BnF, but the FRDA is restricted to the period 1787-1799. The BnF did its very best to provide FRDA with new photographs of relevant items.

One of the points worth noticing here is that French cartoons were already an established genre long before Honoré Daumier (1808-1879) started creating his famous drawings of French society. The title of the BnF’s virtual exhibition Daumier et ses héritiers is therefore somewhat misleading, even though admittedly his images of lawyers are among the most stereotyped cartoons of any profession. Dieter and Lilian Noack have created The Daumier Register, a database with an overview of Daumier’s work, and Brandeis University offers online some 4,000 lithographed drawings by Daumier. Another point is that a set of drawings or engravings in a particular collection can almost make a prolonged search for more general digital collections superfluous. The digitized Lexikon der Revolutions-Ikonographie in der europäischen Druckgraphik 1789-1889 (Universität Giessen) contains nearly 11,000 images with pictorial representations in European printed art of revolutions between 1789 and 1889, but more importantly it gives a theoretical framework to the role and importance of graphic images.

Let’s end here with a remark about digitized portraits: you might want to search yourself for other portraits of Voltaire. A large number of links to digital portrait collections has been put together on the website of the Trierer Porträtdatenbank.

For some readers the link with legal history in this contribution might seem very weak or simple absent! However, I would adduce here the fact how art can be a law to itself. Cartoons have a peculiar position between more elitist art forms and popular culture. Caricatures seize upon imagination, but surely are linked to facts and opinions, too. The role of law and justice in Ancien Régime France was a hotly debated matter, and this debate must have touched all kinds of contemporary media. One of the things meriting further research is the role of illustrations in French pamphlets and broadsides. A quick first search using the relevant digital collections for France list on my own page for digitized pamphlets did not yield anything, but my impression could be wrong. Perhaps one can extend such questions also to illustrated chapbooks – in particular the Bibliothèque Bleue de Troyes – and ballads. However, my habit to put too many subjects in a single post should not prevail again. Having here links to many interesting collections only one mouse click away should form an invitation to explore things yourself. In future posts you will encounter legal history again in its widest possible variety!

Otto Vervaart’s blog about legal history and history from perspectives touching on legal history, a companion to Rechtshistorie. My Dutch view adds a personal note.