A fortnight ago I wrote about Ferdinand Grapperhaus, the deceased Leiden specialist of the history of taxation. At the very moment that I would like to write about Leiden as a center of legal history another scholar from its university has died, Pieter Willem Pestman. Today Gregg Schwendner, the creator of the blog What’s New in Papyrology, notes the obituary and bibliography on the website of the Leids Papyrologisch Instituut. No doubt this obituary will be translated into English.

Teaching and research at the Leiden department for legal history has three general focuses, the history of Roman law, European private law and European public law. However, some more specific themes are forever associated with research by scholars from Leiden. Eduard Maurits Meijers (1880-1954) is famous as the scholar who almost single handed started modern research into the legal doctrines developed at the medieval university of Orleans. His personal library included many early printed books and manuscripts. For many years the department was housed at the Gravensteen, the former county and city prison. Meijers’ books were kept separately in a special room. Nowadays these books and his collection of manuscripts are kept at Leiden University Library. Mentioning medieval legal manuscripts and Leiden must include the yearly Friday privatissimum, the special seminar in which palaeographers and legal historians decipher and study together medieval manuscripts with juridical texts. 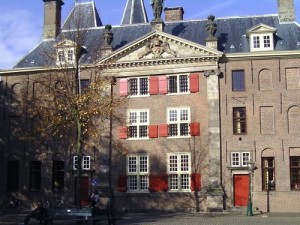 Not just medieval law is studied at Leiden. Hugo Grotius gets deservedly attention as one of the most distinguished scholars of the Dutch Golden Age, and not just from the viewpoint of Dutch legal history. A juridical court, the Great Council of Malines, has been the focus of a project which touched both learned law and institutional history. Many sources for Dutch legal history have been studied and edited by scholars from Leiden. And how can one write about legal history at Leiden without due reference to the ongoing research into the history and the influence of Roman law? You do not have to agree with the idea that Roman law can immediately contribute to the creation of modern European supranational law in a kind of renewal of the 19th century Pandektistik, but you cannot ignore Roman law if you study for instance the new Dutch Burgerlijk Wetboek which shows more influence from Roman law than Meijers, initially charged with the drawing of this new code of civil law, had in mind.

It is difficult for me not to expand all this information or just to mention more legal historians, for example those who studied at Leiden and now work elsewhere. One should of course refer to the Tijdschrift voor Rechtsgeschiedenis. Today one has to remember those scholars no longer with us. However, let me at least thank legal historians working or trained at Leiden for all encouragements, constructive criticism and kind help given since many years to me and many others.