On March 7, 2013 the online edition of the New York Times ran a story on the digitization of the secret dossier on the Dreyfus Affair by the historical department of the French Ministry of Defense. The documents are accompanied by full transcriptions at the website which accompanies the recent book by Pauline Peretz, Pierre Gervais and Pierre Stutin, Le dossier secret de l’affaire Dreyfus (Paris 2012). In their book they publish documents which had until now been neglected or usually presented in versions now proven to be less correct than one had reason to believe.

On the website the three authors discuss not only the trials, but they point for example also to the earliest movie about the Dreyfus affair. The site has even its own discussion forum and amounts to a portal on the Dreyfus case. Only a section with links to other websites seemed at first absent, and in my post I tried to provide information to fill this gap. In fact I mistakenly looked more at the sidebar of the website than at the main menu! A number of virtual exhibitions contain rich visual and written information on a case which for many years divided opinions in France. The Dreyfus affair became soon a focus point of political and social strife. Antisemitism played a large role, but nationalism and militarism, too, fueled the furious exchanges between dreyfusards and their opponents. 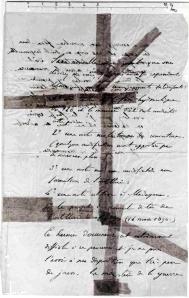 There is scarcely any need to mention here the main facts of the affair around Alfred Dreyfus (1859-1935), because they occupy a place of its own in European and French history. A central place in the Dreyfus affair has always been given to the bordereau from 1894, the document in which Dreyfus allegedly gave secret military information to the Germans. It was only five years later that this document was definitely unmasked as a falsification. Historians trained as medievalists, in particular professors at the École nationale des Chartes (ENC), were the first to apply a rigorous historical examination to the bordereau. Arthur Giry, Auguste Molinier and Paul Meyer were all ancient students of or professors at this famous grand établissement for the formation of archivists, palaeographers and historians, The auxiliary historical sciences, in particular palaeography, the study of old scripts, and diplomatics, the critical study of documents, are still central to the education given at the ENC.

Among the other falsifications in the dossier secret (SHD/GR 4 J 118, kept at the Centre historique des archives of the Service Historique de la Défense in Vincennes) is the faux Henry (cotes 365-370) from 1896. Its false nature was detected in 1898. When the court in Rennes established this as a truth army officer Henry committed suicide in his prison cell.

The Dreyfus affair and modern memory

Mass communication was one of the factors in giving the Dreyfus affair its enormous scale and impact. Newspapers and magazines covered all developments extensively. In the struggle for new readers cartoonists and photographers were engaged. The cartoon of Dreyfus as the head of Medusa has become an icon of French illustrations in the late nineteenth century. Photographs, cartoons and more sober drawings provide a living image of this cause célèbre. They are also an important element at several websites.

On my website I have created a special page for virtual exhibitions concerning legal history. The Dreyfus affair looms large among virtual exhibitions on French legal history. 1906 Dreyfus réhabilité, “1906: Dreyfus rehabilitated”, is a bilingual website of the French Ministry of Culture which functions as a portal to all kind of media concerning Dreyfus. It offers a great starting point for anyone curious about the Dreyfus affair. Savoir et Enseignement. L’affaire Dreyfus et l’École Normale Supérieure, “Knowledge and Education: The Dreyfus Affair and the École Normale Supérieure”, is a small online exhibition on the aspects of the case which touched this institute for higher education in Paris. The Schoenberg Center for Electronic Text and Image of the University of Pennsylvania Libraries has created a website for the Lorraine Beitler Collection of the Dreyfus Affair with more than 1,000 documents related to the impact of the affaire on French culture and society. Recently Duke University Libraries launched the virtual exhibition A Mockery of Justice: Caricature and the Dreyfus Affair with a number of cartoons, including the dragon head cartoon from the Musée des Horreurs. In its web exposition on the writer Émile Zola the Bibliothèque nationale de France does of course cover the Dreyfus affair, and the library provides additional information, too. The website Le capitaine Alfred Dreyfus à Rennes, “un reportage oublié de l’été 1899″ shows a number of rare photographs taken in Rennes during the 1899 revision trial. At L’histoire par image 1643-1945, a website with a fine selection of important images on French history, you can find some of the best known images about the affair. The Musée d’art et histoire du judaïsme in Paris has created a website around its Fonds Dreyfus.

When looking for images it is also useful to consult the website of the Agence photographique des Musées nationaux. A first simple search indicates that you will find scores of images on the Dreyfus affair. The search engine of the French cultural portal Culture is also very helpful in finding all kind of resources. It brings you for example to images in the Joconde database for French museal collections of 23 drawings of the 1906 trial now kept at the Musée des Beaux Arts in Angers. In 1906 Dreyfus got rehabilitated. He received the Légion d’Honneur and served during the First World War. You can search online in the Leonore database of the French national archives to view the card with his honors, first the rank of chevalier in 1906, and in 1919 a promotion to officier. The 20 digitized pages constitute actually a rather complete dossier of his life and career (LH/803/61), including a physical description of Dreyfus.

The end of the Rennes trial approaches – cartoon by V. Geldorp from the Amsterdamse Courant, September 8, 1899 – image from The Memory of the Netherlands, http://www.geheugenvannederland.nl/?/en/homepage

Before I start writing here about two Dutch angles on the Dreyfus affair I am happy to thank Agnes Jonker (University of Amsterdam and Archiefschool, Hogeschool van Amsterdam) for alerting me about the digitization of the dossier secret. By only pointing to the numerous websites with digitized historical newspapers it is already clear that the number of images of Dreyfus and all people who came into the picture during the long years of his trials can be easily expanded. For a Dutch twist I can mention for example a cartoon in the Amsterdamse Courant of Dreyfus’ opponents trying to tear the blindfold from Themis’s eyes. It is really interesting that not as most often Lady Justice but Themis, the muse of law, is portrayed here. Perhaps the presence of the Dutch law journal Themis – now called Rechtsgeleerd Magazijn Themis – helped the cartoonist in his choice.

To end with yet another Dutch twist, a rather large part of the dossier secret is occupied by letters which touch only the margins of the Dreyfus affair. The numbers 159 to 235 of the dossier secret are love letters by Hermance de Weede, the wife of the Dutch ambassador in Paris, to the German military attaché Schwartzkoppen. Hearing about this part of the story readers of Umberto Eco’s novel The Prague cemetery will admit that even the makers of falsifications and all those people fueling nasty sentiments in the media of the late nineteenth century would not have thought of getting these love letters into the case file of the Dreyfus affair, certainly not in view of the Parisian way of life in that age. Other love affairs are indeed present, too, in the fascinating pages of the dossier secret, but around 1900 they constituted the more combustible part of it.

Let’s add another Dutch angle on the Dreyfus affair, one that I should have mentioned already when writing. The International Institute of Social History in Amsterdam has substantial holdings on this subject, including publications from the late nineteenth century. Cartoons are not missing among the items to be found. Among the Dutch books are publications by Aaron Adolf de Pinto (1828-1907), a judge of the Hoge Raad, the Dutch Supreme Court, in particular Het proces-Dreyfus getoetst aan wet en recht (2 vol., ‘s-Gravenhage 1899). Alas the digitized copy in the Igitur Archive of Utrecht University is not published in open access.