Medieval sources come in a variety of genres. Among sources for medieval legal history the Early Medieval formulae are in a class of its own. The kind of Latin is not as classical as you might like it to be, and the rather old standard edition has now too many defects to be useful. Creating a new edition will be a project requiring besides excellent knowledge of medieval Latin and among much more also stamina and financial support during many years. The Universität Hamburg has got the courage to start the edition project Formulae – Litterae – Chartae led by Philippe Depreux in cooperation with the Monumenta Germaniae Historica, Munich. The project is scheduled to run from 2017 to 2031, and thus I look here at it in a relatively early phase.

The title of the project might be the first surprise. Why include also letters and charters when formulae are the core? In the edition of Karl Zeumer, Formulae Merowingici et Karolini aevi. Accedunt ordines iudiciorum Dei (Hannover, 1882-1886; online, Munich) the formulae have been edited not in the sequence of the manuscripts he used, but in his own order, interspersed with other materials. This way of proceeding is rather remarkable in view of German philological practice in the late nineteenth century, and certainly it stands out among the editions published under the aegis of the MGH.

Formulae were not just formalized legal actions. The project team explains that Early Medieval formulae were a kind of model letters to be used, each with a distinct purpose. The formulae were to be followed as strictly as the formulae of the oldest Romans before standard actions came into existence. They could als serve as models of letters and charters from which you could benefit with some freedom. In my view the mixture of letters and charters is somewhat akin to the mix of both letters and charters in the project Epistolae: Medieval Women’s Latin Letters discussed here some years ago. Both projects face the challenge of dealing with two different genres, not just in view of their content, but also for editorial policies.

Apart from an introduction to the formulae the project team offers also introductions to letters and charters. Their character as a means not just or private communication, but as elements of public communication is stressed. The transmission off formulae in collections was not straightforward in clear sections with a discernable order. Karl Zeumer and Eugène de Rozière, an earlier editor of formulae in the nineteenth century, were indeed faced with a genre which called for deep reflection and great skills. Zeumer’s edition can be found in a searchable version also at the digital platform dMGH of the Monumenta Germaniae Historica. De Rozière (1820-1896) was very young when he published his first edition of formulae, the Formulae Andegavenses publiées d’après le manuscrit de Weingarten actuellement à Fulde (Paris 1844; online, Google (copy Koninklijke Bibliotheek, The Hague)). He was in 1855 one of the founders of the Revue historique de droit français et étranger. In 1869 he published an edition of the Liber Diurnus with formulae used in the papal chancery from the fifth to the eleventh century. 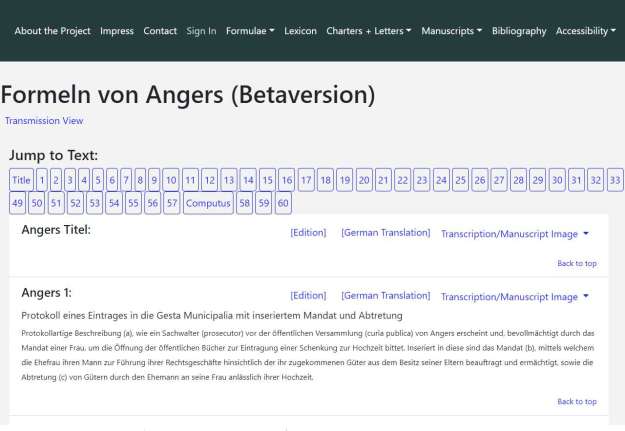 The edition interface, here the preliminary edition of the Formulae Andecavenses

Now you might already sigh that even fifteen years is too short to tackle this complex of three resource genres, but here comes a second surprise: The team at Hamburg gives you online access in their Werkstatt to a reading interface and an editorial interface for the collections. The interface can be viewed in German, English and French. The online laboratory brings you to the beta version for the formulae Andecavenses (from Angers), to an edition for one manuscript (Fulda, Hessische Landesbibliothek, D1), to charters and letters, and also to a bibliography and a list of manuscripts and charters. Amazingly, at least one manuscript is still held in the library of a functioning Benedictine abbey, at Egmond-Binnen in the Dutch province North Holland near Alkmaar. At Leiden are five manuscripts, but most manuscripts can be found in Munich, Paris, Vienna and Vatican City. One of the reasons for writing about formulae is my memory of a workshop about this genre held at Leiden with some of the manuscripts in front of the participants. The list of manuscripts ends with the editions created for formulae from the seventeenth century until the twentieth century, with names as Étienne Baluze and Jean Mabillon among the editors. 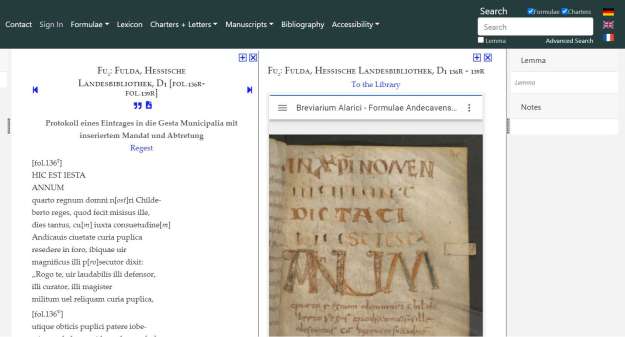 In the section for charters and letters you can read older editions of these sources. When you look at the manuscript Fulda, Hessische Landesbibliothek, D 1, again the Formulae Andecavenses come into view. Currently the list of manuscripts show only the locations, signatures and editiorial sigla. It would be wonderful to have here also descriptions of these manuscripts and links to digitized versions, qualities giving strength to the projects Bibliotheca Legum: eine Handschriftendatenbank zum weltlichen Recht im Frankenreich and Capitularia: Edition der fränkischen Herrschererlasse, both led by Karl Ubl at the Universität Köln. Information about the manuscript at Fulda is indeed present in the Bibliotheca legum. No doubt relevant manuscripts will eventually become accessible at the editorial interface in Hamburg.

At least two databases elsewhere help you to look at the various collections with formulae. The repertory Geschichtsquellen des deutschen Mittelalters (Bayerische Akademie der Wissenschaften) contains information about the transmission and relevant literature for many relevant collections with formulae. The Heidelberger Hypertextserver has a section on Formelbucher which touches also later periods. Among the Early Medieval formulae in particular the Formulae Marculfi receive attention in Heidelberg.

Surely the project at Hamburg will benefit enormously from the way you can nowadays have digitized versions of manuscripts in front of you on your computer screen, but creating new editions for this century will have to take into account much more than in the old editions the interplay with letters and surviving charters which are now, too, much more easily within our reach thanks to modern editions and digital versions. The differences in transmission of the texts, too, are much more visible. Once upon a time it was seducing to create an edition with the supposed Urtext, but seeing every manuscript, letter or charter as a witness with its own qualities and defects will do more justice to the life and afterlife of these intriguing texts. Some of the manuscripts are quite small. You might want to look at the place of formulae between other texts in a manuscript, too. The project website in Hamburg has a section Fokus der Forschung with recent contributions about many aspects of the Early Medieval formulae. Hopefully the new edition will help to bring the formulae again into view for scholars wanting to investigate in particular the way Late Antiquity evolved into the medieval period. Legal history, the uses of literacy and the interaction between various genres are just a few of the subjects to be enriched from careful and inventive studies of formulae.