Empires come and go in different forms. The Spanish colonial empire came into existence and made its mark on people not only by physical conquest, but also by the power of words in print. The sixteenth century was witness to the success of the printing press. Governments used books in many ways. In this post I would like to introduce a new digital collection concerning colonial law in Latin America created by the library of the Max-Planck-Institute for European Legal History in Frankfurt am Main, In recent years global and transnational legal history has become a major focus in the various programs of this institute. At the start of a new academic year and at many other moments it is always sensible for legal historians to have a look at the developments of this great research institute.

The laws of the Indies 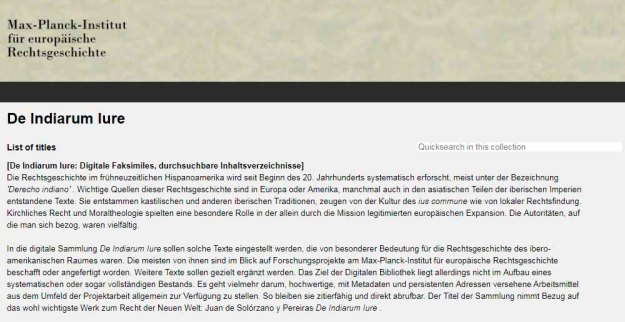 The new digital collection has a Latin name, De Indiarum iure, “On the law of the Indies”. As for now there are 33 titles in this collection. Instead of deploring the low number of books you had better appreciate the presence of works on canon law and the Christian faith. This mixture of subjects shows in a nutshell the all-encompassing impact of the books the Spanish published, mainly in Mexico and sometimes elsewhere in Latin America. The work that gives its name to the collection, Juan de Solórzano y Pereira’s De Indiarum Iure, has not yet been digitized within this digital library. You can consult online a copy of the first edition (Madrid 1629) in the Internet Archive (copy Rome, Biblioteca Nazionale Centrale). There is a reprint of this edition (Frankfurt am Main, 2006). A modern critical edition of this text has been published in the series Corpus Hispanorum de poce by C. Baciero (3 vol., Madrid 1994-2001).

More to the point is perhaps the question of the relation of this new collection to the project of this Max-Planck-Institute around the legal history of the School of Salamanca. The term School of Salamanca refers to Early Modern authors who taught at Salamanca in the fields of law, theology and philosophy. A fair number of them were either Dominicans or Jesuits, and their background was another factor in making the debates more interesting and complicated. In fact there is a web page of the institute for cooperation with a second project in Germany concerning this Spanish university, The School of Salamanca (Akademie der Wissenschaften und der Literatur, Mainz). Thomas Duve, one of the two directors of the MPI in Frankfurt in Main, leads also this project in Mainz. The Mainz project will eventually also present a digital library of relevant resources. Thoughtfully one has already provided a list of works to be digitized. The website of the Salamanca project at Mainz points to a number of relevant links and even a mailing list for those interested in the project. These webpages can be viewed in German, English and Spanish. 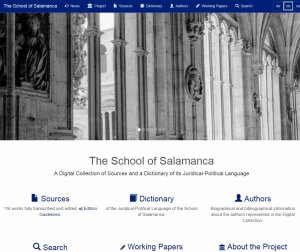 At a separate website, The School of Salamanca, with indeed a very sensible use of the extension .school in its URL, you may want consult the digital collection created for the project at Mainz which now contains 118 works. On closer inspection you will find currently only 21 works, with links to the online catalogue of the university library at Salamanca, but no actual links to digitized works. However, in the digital library of the Universidad de Salamanca you will find a number of the works announced at Mainz. Where possible links to digitized works at Salamanca could be added swiftly. The website with the digital library will also contain a legal-political dictionary. Both projects seem promising, but at this moment they both do not yet bring you completely what you would expect. The MPI website does not yet give you the URL of the joint digital collection. By all means one can wonder about the launch of two related digital collections which seem to cry out for an integral approach following the lines of the new projects at the MPI which cross borders effortlessly. Both projects do look beyond more traditional ways of inquiry. The blog of the Mainz project is one of the places to look for various aspects of modern research into Spanish authors, as does the general page of the MPI on the School of Salamanca and legal history.

A third project, Scholastica Colonialis, is worth some attention here, too. Scholars from six countries do research on the history of Spanish and colonial philosophy in the Early Modern period. This project will not contain a digital collection.

On purpose I mentioned the absence of a special digital collection at Scholastica Colonialis. In view of the variety of digital libraries in Latin America and those in Spain and Portugal concerning the Americas it is justifiable to question the need for a new digital collection. The MPI wisely chooses at De Indiarum iure mostly works not commonly associated with legal history. The project at Mainz has not yet completely implemented its choice for works digitized at Salamanca, but its aim and the argumentation behind this choice seem clear. To get an idea of the number of digital libraries for both North and South America you might want to look at the links collection I created at my own legal history website. For perfectly understandable reasons the MPI at Frankfurt am Main does not maintain a portal for legal history with extensive links collections, otherwise I probably would not have started my own pages with links to digital libraries, archives and image collections. To mention a few examples of the very extent of such libraries, the international Biblioteca Digital de Patrimonio Iberoamericano now even has a section for incunabula. Primeros Libros de las Americas is a second international project which brings you books printed in the Americas before 1601. This is the place to mention also the online Catálogo Colectivo de Impresos Latinoamericanos hasta 1851 for Latin American editions, and you might want to use the Catálogo Colectivo del Patrimonio Bibliográfico Español.

My first impression of the De Indiarum iure digital collection at Frankfurt am Main is mixed. Perhaps it is best to see it as a kind of preview. When eventually more titles have been added to it, the collection will certainly be a further asset to the digital library of the Max-Planck-Institut für europäische Rechtsgeschichte. No doubt the word “European” will one day disappear from its name! The digital collection at Mainz strangely lacks links to digitized books, but this omission can easily be repaired. A second thing to keep in mind is that whatever the qualities of both digital collections might be, they form elements for projects that will massively enrich our knowledge, understanding and views of the School of Salamanca as a factor in Spanish and Latin American history with a fascinating interplay between scholastic thought, legislation and Early Modern debates on many aspects of law and society.

In Spring 2018 it is possible to access 21 digitized books in the digital corner of the School of Salamanca; they can be viewed using the IIIF Mirador viewer.