Many blogs honour the tradition of a seasonal post for the end of the year. Alas I cannot offer you recent pictures of Utrecht with snow, but over the years I have found another thread for my contribution to this genre. A bit of frost and foggy weather brought me in the right mood for it! The main squares in Utrecht are not very large. The Vredenburg square named after a sixteenth-century fortification has become quite small. The Domplein square is not much more than the space between the remaining choir of the former cathedral and the Domtoren. Only the Janskerkhof is a real square around a church. The Janskerk was a collegiate church with houses for the canons around the churchyard and in adjacent streets. Even to my own surprise the Janskerkhof comes into view here at many turns. In this post it has even an unexpected role in the work I do at present at Het Utrechts Archief, the municipal and provincial archives of Utrecht. Much of my knowledge comes from the website Huizen aan het Janskerkhof [Houses at the Janskerkhof] created by Caroline Pelser. 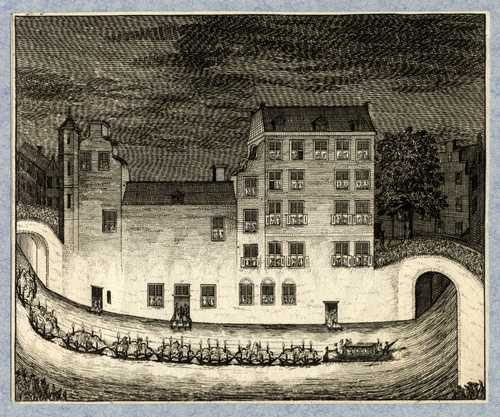 N. Chevalier, Gondolas in the Drift near Janskerkhof 12 during a feast given by the Portuguese servants of the count De Tarouca in 1714 – Utrecht, Het Utrechts Archief, cat. no. 32392

At Het Utrechts Archief I assist in the creation of a new and very extensive finding aid for the archival collections from the castle Hardenbroek near Cothen and the families connected with its owners. I mentioned this castle in June in my post about manors and castles in Utrecht. Caroline Pelser gives for four houses at and near the Janskerkhof documentation in which members of the Hardenbroek family appear, I will focus on one particular house, but let’s start with three other houses. In 1684 Johan van Hardenbroek and his wife Florentina van Mathenesse, scion of a rich family connected with Rotterdam, rented one half of the house with the current address Janskerkhof 12, now used by the Molengraaff Institute for Private Law. Near this building is a relief in honour of Willem Molengraaff (1858-1931), a famous law professor, as you can see on my photograph in an earlier post.

A century later, in 1788, Florentina Elisabeth van Hardenbroek rented the house at Drift 11. Its most famous inhabitant was Christophorus Buys Ballot (1817-1890), the founder of the Dutch meteorological institute and still known for Buys Ballot’s law, one of the few meteorological laws. This house, too, eventually became for some time home to a university institute; it houses now the office of a charitable institution.

The Voorstraat is the street around the north and west side of the area once forming the immunity or precinct of the chapter of St. John. At Voorstraat 79 Karel Gijsbert Jan van Hardenbroek rented in 1911 a room as a student at Utrecht University. Currently the building is united with Voorstraat 77, at the corner with the Boothstraat leading directly to the Janskerkhof, and used for a restaurant. 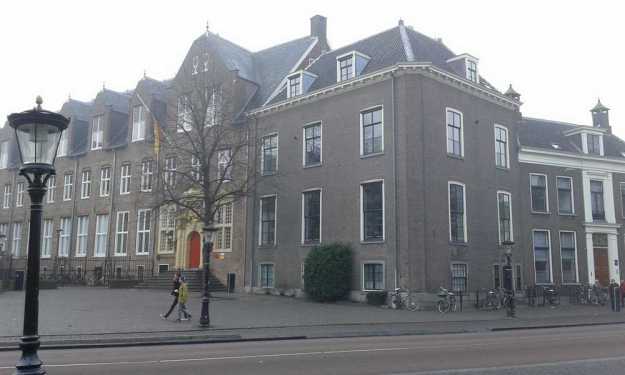 However inglorious Voorstraat 79 might now be, with Janskerkhof 2 you encounter one of the most impressive buildings around the Janskerkhof. It lies directly adjacent to the building used by the States of Utrecht, the Statenkamer, the premises of a former Franciscan convent. Recently the buildings of the Statenkamer have served Utrecht University for many years as the home of the Law Library, yet another familiar spot for the readers of this blog. Janskerkhof 2 has the strongest connection with the Van Hardenbroeks. The house came in the seventeenth century in the possession of Cornelis Booth, a city councillor who was very interested in the history of Utrecht. He did not sell this house when he moved to the house which is now Boothstraat 6 at the north side of the Janskerkhof. His manuscripts kept at Het Utrechts Archief are invaluable sources for the history of the town and province Utrecht (collections no. 355, Verzameling Buchel-Booth, and no. 759, Familie Booth).

In 1766 the States of Utrecht bought the house at Janskerkhof 2 in order to enlarge the premises of the Statenkamer, but in 1774 they sold it to Gijsbert Jan van Hardenbroek (1719-1788), member of the Ridderschap, the gentry forming the Second Estate in the States of Utrecht. When he became its president in 1781 the members convened in his house they started calling the Ridderschapshuis. In his will he stipulated the gentry would inherit his house. In 1824 a nephew, Ernest Louis van Hardenbroek (1774-1843) lived in it. Only in 1850 the Provinciewet made an end to the function of the gentry in the provincial states. The former members of the gentry formed a society under civil law and used the Ridderschapshuis until 1880. In 1881 at last the building of the former Statenkamer at Janskerkhof 3, since 1816 owned by Utrecht University, was connected to Janskerkhof 2. Hence a later inhabitant, A.A.W. Huybrecht (1853-1915), a zoologist and a pioneer of modern embryology, lived directly next door to his lecture hall and laboratory. A short article by L.M. Rutgers van Rozenburg about Janskerkhof 2, ‘Geschiedenis van het Ridderschapshuis te Utrecht (1781-heden)’. Maandblad Oud-Utrecht 56 (1983) 172-174, can be read online. Utrecht University Library maintains the online bibliography for the history of Utrecht in which you can find more publications about many subjects touching Utrecht, sometimes enhanced with links to digital versions.

Gijsbert Jan van Hardenbroek is the best documented member of the Van Hardenbroeks, The new inventory will show many aspects of his activities in various functions, For example. he was not only a very active member of the States of Utrecht, but also member of the Staten-Generaal. It is tempting to give here teasers from the archival records at Het Utrechts Archief. They shed new light on his memoirs edited by F.J.L. Krämer and A.J. van der Meulen, Gedenkschriften van Gijsbert Jan van Hardenbroek, heer van Bergestein, Lockhorst, ‘s Heeraartsberg, Bergambacht en Ammerstol, president der Utrechtsche ridderschap, gedeputeerde ter Generaliteitsvergadering enz. (1747-1787) (6 vol., Amsterdam 1901-1918).

Being the lord of Bergambacht and a castle in this village resulted in a number of archival records which are essential for studying this location and the area around it in the current province South Holland. Looking at his house in Utrecht so closely connected with his functions helps to see his castle Hardenbroek in the right perspective. However, other Van Hardenbroeks are every bit as interesting as this remarkable member of a family tracing its ancestors back into the fourteenth century. If you want to pursue the history of the houses at the Janskerkhof in more detail you can use the online version at the Digital Library for Dutch Literature of the descriptions given in the standard work by Marceline Dolfin, E.M. Kylstra and Jean Penders (eds.), Utrecht. De huizen binnen de singels (2 vol., The Hague 1989). Caroline Pelser has added links to the specific sections in this work for a particular house at the end of each web page.

The new inventory of the family and castle archive Van Hardenbroek is the result of nearly twenty years work by C.A. van Kalveen, and I am happy to help him finishing it at the Utrecht archives. One of my colleagues at Het Utrechts Archief, Floortje Tuinstra, has written an article about the houses rented by the delegations negotiating from 1712 to 1714 the treaties of the Peace of Utrecht [‘De Vrede van Utrecht gelokaliseerd. Huisvesting van de diplomaten’, in: De Vrede van Utrecht. Jaarboek Oud-Utrecht 2013, 69-94]. Her article alerted me to the etching with the gondolas in the Drift canal. Houses at the Janskerkhof and surroundings streets, too, served as residences for some of the delegations. If you would like to find more images of the Janskerkhof, the Ridderschapshuis and the Statenkamer, you can search for them at the website of Het Utrechts Archief, and also in the image database of the Dutch Heritage Agency, the Memory of the Netherlands and the Atlas van Stolk. Last but not least I should recommend the website of Caroline Pelser and her very useful overview of sources concerning not only the Janskerkhof but in particular the legal history of both the town and province Utrecht.