At the end of last week’s post featuring Lady Justice’s square I wrote about a bas-relief by Jeanot Bürgi showing a Roman lictor as his reaction to the invitation to make a sculpture portraying a law faculty, but I did not include a picture of it. Today I made a photo of this bas-relief along the Nieuwegracht in Utrecht. The medieval canals in Utrecht are very typical. Unlike canals in cities as Amsterdam, Leiden and Delft they have werven, quays on each side. Only the Kromme Nieuwegracht and Plompetorengracht have a more usual form, but there, too, the street with cellars under the pavement is high above the water level. 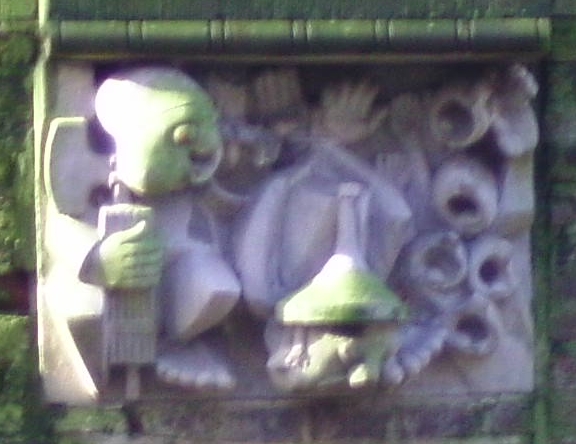 A lictor in his role of executioner - sculpture by Jeanot Bürgi

My photo does not present the sculpture in its very new, almost white form as on the photograph in Reliëfs in blauw, but thirty years later, tested by time and rain. I had to take this picture from the other side of the canal standing on the wharf, not more closely from a bridge like the picture in the other post. Even now you can see a lot. Bürgi has clearly chosen a rather grim aspect of early Roman law. As an executioner the lictor does not look very likeable when his axe comes down on the neck of the criminal. The public is represented by a series of wide opened yelling mouths. The fasces are also an element of the fence around the old Court of Justice. The immediate vicinity of this court probably worked as a suggestion for the sculptor. You can see these sculptures only when you walk fairly attentive along the old canals of Utrecht. For some images of justice you certainly have to search carefully, and these sculptures below street level offer an example in its own class.