Two weeks ago I left my blog for a holiday on Terschelling, one of the five Dutch Waddeneilanden, the Frisian Islands. It is time to come back to my post about these islands. Reading it again it clearly needs some additions and clarification. Thanks to my recent visit I can really complete a line of thought which loomed at first rather dim and hesitant. 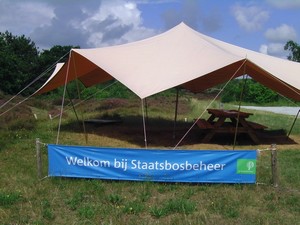 The Staatsbosbeheer group camping at Swartduin

At the heart of my post on Terschelling was the struggle between the protection of natural beauty, represented by Staatsbosbeheer, the Dutch National Forest Service, and the interests of tourism, the core of the economy on these islands, represented by both the municipalities and the citizens of the Wadden Islands. The Dutch National Forest Service wants to increase the long lease rents due to them drastically. It is easy to see that the conflict here is also about the power of a public body in the role of a private land owner with a position tantamount to a monopoly. Whatever the outcome of this clash which implicates the boundaries between public and private law it is bound to be of interest to legal historians.

My search for legal documents about Terschelling has still barely started, but I could have pointed already to the very useful collection of sources presented at the website Regelgeving in de Nederlanden (Legal administration in the Low Countries). Alas you will not find here any sources which pertain only to the Frisian Islands, but among the sources for Frisian law you can find the main law texts, for instance the Lex Frisionum. The Dutch national website on jurisdiction, Rechtspraak, offers on the page of the Leeuwarden court a short general history of the Frisian courts. 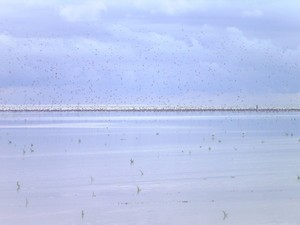 “…where you doubt whether it is a part of the sea or of the earth.”

I owe you the exact reference to the words of Pliny the Elder about the Wadden region: it is in Naturalis Historia, 16.1.2. The striking thing is of course the nearly seamless transition between land, air and sea. Walking on the Groene Strand, the Green Beach, makes you wonder why this particular area is not a national park. Now only the area around a number of dunes where artic terns (Sterna paradisaea) have their nests is marked as a bird reserve. In fact it has long been pleaded to make the Dutch Waddenzee into a National Park. Nature is such a scarce commodity in the densely populated Low Countries. Why should one hesitate to take action?

The Frisian Islands came into existence in the late thirteenth century when a former wall of dunes was finally broken by the power of the sea, thus creating the Waddenzee. I mentioned in my July post on Terschelling the fact that the Boschplaat has been added to the island since the second half of the nineteenth century when the former strait of the Koggendiep silted up. Geologists see a long-term development in which the Frisian Islands slowly move to the east. The Dutch National Forest Service invites groups of volunteers to help removing firs from the dunes. Dune areas should not become woods any more. One can certainly distinguish areas of outstanding natural beauty on Terschelling and the other Dutch Frisian Islands, but the question is exactly whether these islands have a distinct and definitive natural form. To my eyes nature here is in an eternal flow. Islands will move. The tides reshape their form not just twice daily, but also in the long run. Creating screens and dikes on sand plates and fostering dunes is an act of man making nature obey to some measure to his wishes. In the end, however, the forces at work here escape man’s grasp. The great paradox of natural beauty is indeed being often only recognized by making it a part of a landscape park, almost the Enlightenment version of the Garden of Eden. The very word landscape was first used in English to describe Dutch paintings representing outdoor scenes situated in a landschap, a man-made environment.

It is not my objective to dispute the ecological wealth of the Waddenzee or to doubt the need for protection. My question is not just which natural environment is most outstanding, but what does the concept of nature mean when it is so clearly fluent? Can one point to the original state of the Waddenzee? How can one use nature as a juridical concept when you have to acknowledge the fact that nature does not equate automatically with a stable order nor with utter chaos? In this light natural law most definitely emerges as a man-made argument par excellence.

The original idea of a vacation period was to free one self from daily doings and squalid affairs. Theologians wrote about vacare Deo, free one self for God. Hopefully your own holidays help you to look freshly again at anything and everything.

To finish things let me point to the Tractatus Tiberiadis from 1355 by Bartolo de Sassoferrato, the first treatise on legal geography as Osvaldo Cavallar wrote in his article ‘River of Law: Bartolus’s Tiberiadis (De alluvione)’, in: A Renaissance of Conflicts. Visions and Revisions of Law and Society in Italy and Spain, John A. Marino and Thomas Kuehn (edd.) (Toronto 2004) 31-129, with an edition of Bartolo’s treatise. You can read online the version of the text in a Lyonnese edition from 1555 of Bartolo’s consila and treatises in the digital library for legal history at Milan, starting at fol. 139 verso (page 278). For more information and images you can also read this post on the blog of the Fonds Anciens at the Bibliothèque Interuniversitaire de Lyon.

I would also like to mention the Tractaet of dyckagie by Andries Vierlingh (circa 1507-1579), a treatise on dike building. The 1920 edition by J. de Hullu and A.G. Verhoeven has been digitized by the Instituut voor Nederlandse Geschiedenis, The Hague. More information in English about the history of Terschelling and other Dutch islands is presented by Ruud Bijlsma at his Islas website. Old maps of Terschelling are discussed and presented in a study by Marijke Donkersloot-de Vrij, Scellinge.Vijf eeuwen kartografie van Terschelling (Utrecht 2002). The Royal Dutch Academy of Sciences has started a Waddenacademie.

Somewhat belatedly I noticed Terschelling is home to seven duck decoys. A recent study has been devoted to them by Piet Lautenbach, Eendenkooien. De laatste heiligdommen van Terschelling [Duck decoys, the last sanctuaries of Terschelling] (Assen, 2011). The National Forestry Service pointed at its Terschelling blog in 2011 to the fact that some of these duck decoys have one owner, but others have multiple owners, and indicated also differences in the maintenance of them.

The theme of alluvial growth of land in Frisia and its impact on legal history is pursuited in a recent article by Kees Kuiken, ‘Opstrek of aanwas? Bezits- en rechtsverhoudingen in en om Het Bildt in Friesland tot 1506’ [Increase or alluvion? Properties and legal relations in and around Het Bildt in Frisia until 1506], Pro Memorie 14 (2012) 31-54.